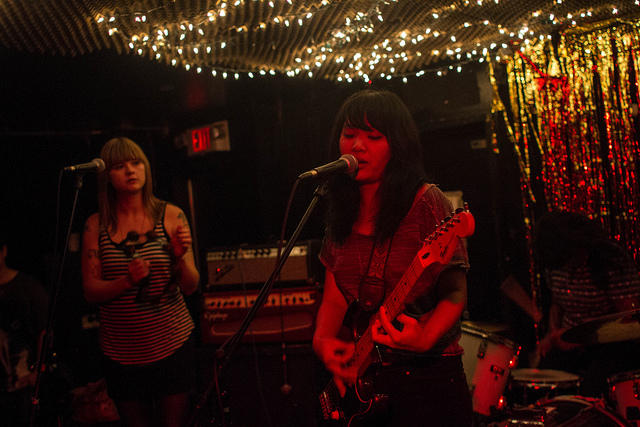 Heliotropes ran a muck around NYC during CMJ this year, and one of their stops was at the NYCTaper showcase at Cake Shop. And here’s what NYCTaper had to say:

“At first, it’s hard to grasp that the women of Heliotropes are your showcase’s heaviest band by far. From looking at them, you might not guess that the diverse group of young women makes monster, Sabbath-inspired rock with chunky, wah wah riffs and a raging backbeat. Also one of the newest acts on our CMJ day show bill, these ladies are kindred spirits of modern stoner/psych rockers like The Midnight Ghost Train, Pontiak and others, and they don’t hold back onstage. For a band whose current output consists of some singles on their bandcamp page, Heliotropes already have a well-developed sound and delivery – and based on this set at our unofficial CMJ day show at Cake Shop, are well on their way to an LP. Most of the tracks played at this show were new other than the released single “Ribbons”, and that new material is consistently hard hitting. The band closed out with a favorite of mine from Nirvana’s first album Bleach, the scorching “Negative Creep”, which the women of Heliotropes brought down in tempo a touch to give a more dirge-like sound to the song.”